Well, that was exhausting.

Before getting into the Las Vegas Rock ‘n’ Roll Marathon, let’s go back a few weeks and discuss how training went leading up to December 4th, 2011. After taking off a week or so after my

Chicago Marathon, I was back to training for the next marathon in Las Vegas. I figured 2 months would be plenty of time to recharge and go into the next race ready to PR like nobody’s business. What I didn’t realize was how ready I was for a Saturday off. A day where I could wake up whenever I felt, walk into my living room and play Playstation until the next morning rolls around like a normal 27 year old!

There were 6 weeks between getting going on training again and the race. This is when juggling my runs and my (relatively non-existent) social life got tricky. 6 weekends to get in my long runs, to still have a good time and to apparently travel some more. I succeeded in 2 of those. Guess which two. I did run a 20 mile training run on the first weekend in November and after that, I only completed 1 double digit run and that was an 11 miler when it was supposed to be 18. Things kept getting hairier. When it was time to taper, I felt like I didn’t deserve to taper. I’d been tapering since Chicago it seemed and I just knew when I got to Vegas it would be a train wreck. It was, but not like you would think. 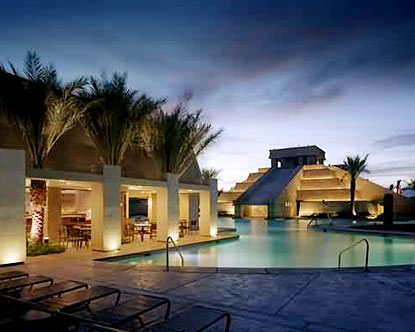 I flew into Las Vegas on Saturday morning anxious to get out there, anxious to put in my bet on Oklahoma State, anxious to see how I would handle being in Las Vegas to run a marathon. I arrived at 9:30am where my Dad and Curtis (my Dad’s fishing buddy) picked me up from the airport. He lives out there and so he let us borrow his truck for the weekend to get around and do our thing. We grabbed a bite to eat and then headed to Palace Station. It was one of the smaller casinos but it was the closest to his house where we were going to drop him off. I placed a few sports bets and then played a few table games (roulette and craps) where I found myself losing money quickly. I stepped back, took a breather and downed 3 glasses of water. Yep, water… in Vegas. **Spoiler alert: I was in Vegas for 49 hours… I had zero cocktails.** We then headed to the hotel (pictured). My sister helped out with the hotel as my birthday gift so that was nice and this is where we were able to catch what was to be the greatest football game I have ever witnessed, the Oklahoma State vs Oklahoma Bedlam Game. Fin Saturday.

Race Day – I woke up at 7am. Made some coffee in the hotel room and watched a little SportsCenter to hear them talk more and more about my Cowboys. The beauty about being out west when it comes to Sunday mornings…. football is on as soon as you wake up. 9am rolled around and I was getting super nervous about the race. I didn’t know what I could eat, what I should eat, when I should stop eating, etc. It was crazy to think about. I was about to run 26.2 miles at a time I’m not accustomed to at all. Typically, marathons begin bright and early in the mornings. I know what to eat the night before, when to get up, what time to have my breakfast, etc. This was completely different and it left me with quite an uneasy feeling. I grabbed a turkey sandwich from Panera Bread and an Everything Bagel for later. I went back to the hotel and decided to take a nap around 11am. I woke up close to 12:30 from that much needed nap and had my bagel. I continued to hydrate and around 2pm, Pops took me down to the starting line.

As I do with every race recap, I’ll give you a breakdown of what I was thinking as the race progressed through another 26.2 miles.

I’m not sure I will enter a Rock’n’Roll Marathon again. It was overall a mediocre experience. It just seemed as if the people who put on the event couldn’t care less about those who ran the full marathon. There were very few aid stations along the full marathon route and the whole debacle along the course with the sectioned off lane for marathoners could have been done better. I know the group makes their money off the the half marathon and that’s why there were only 6,000 marathoners out of the 44,000 runners at the event but they could have done a tad bit more for those who chose to run a full marathon. I hope this doesn’t come off too yuppie, but I just wanted the full marathon to get just a fraction of the attention the half marathon got from the group that put on this event. That would have made it a whole lot better experience for me. It was frustrating.